skip to main | skip to sidebar

Okay, Alexander the Great led me to Siwa in Andrea's 'When on Google Earth 41'.

Before I role out mine, here are, a-one more time, the rules:

When on Google Earth?

Q: What is When on Google Earth?
A: It’s a game for archaeologists, or anybody else willing to have a go!

Q: How do you play it?
A: Simple, you try to identify the site in the picture.

Q: Who wins?
A: The first person to correctly identify the site, including its major period of occupation, wins the game.

Q: What does the winner get?
A: The winner gets bragging rights and the chance to host the next When on Google Earth on his/her own blog!

Despite being overly preoccupied, at the moment, with Persepolis (and possibly the British Museum in about 1906), I'm going to do that slightly annoying thing of posting somewhere slightly obvious that might be to do with:

1) where I've been lately
2) what struck me as quite weird and/or interesting
3) excuse for further questions.

This one fulfils all three, more or less.

- there is a Classical connection, but it is only secondary

- I want to know more (see point three) about the interestingness of the new thing being built on top of the old thing. 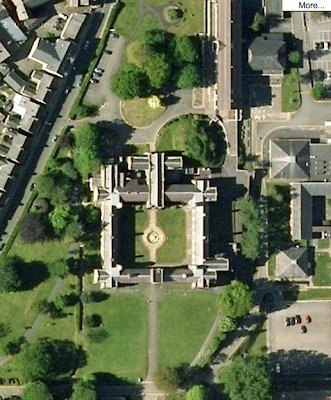 I'll disclose how point 2 occurred to me (which at least I think interesting), after someone gets it.